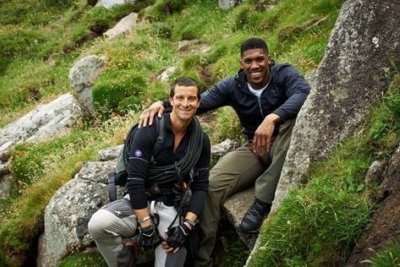 Bear Grylls has spent two days in the wild with boxing champion Anthony Joshua for an ITV special.

In Bear’s Mission with Anthony Joshua the unified world heavyweight champion takes on all that mother nature has to offer after being dropped on one of the UK’s wildest and most iconic coastlines.

The show sees Anthony embrace the great British outdoors, taking on the mission’s challenges which are unlike anything he has had to conquer before. The pair camp out under the stars and Bear has plenty of surprises in store for the Olympic hero.

Bear said: “Taking a home-grown legend like AJ on such an iconic British journey was such a privilege. I’ve had many incredible times with celebrities on Mission Survive, so the chance to take AJ on an adventure was always going to be special. Bear’s Mission with… works so well because we get to see celebrities uncovered, and hear their triumphs and failures, their struggles and motivations, all wrapped around a great journey.”

The 1 x 60 show will be overseen by Amanda Stavri, ITV Commissioner for Factual Entertainment. It is a Bear Grylls Ventures/Electus/betty production for ITV. Electus International is distributing the programme internationally. The programme continues the Mission brand following on from two series of Bear Grylls: Mission Survive for ITV.

Amanda Stavri said: “Viewers can expect a surprising and entertaining journey of discovery, as Britain's ultimate adventurer takes Anthony Joshua out of the boxing ring and into the wild, for the adventure of a lifetime.”

David Harrison, executive producer, betty: “We are delighted to be working with ITV and Bear on Bear’s Mission with… Anthony has become a hero in the boxing ring and has won the hearts of the British public with his hardworking, down to earth approach. To see someone at the top of their game around the world tested in a completely alien environment is not to be missed.”